We Girls Can Do Anything Right Barbie? 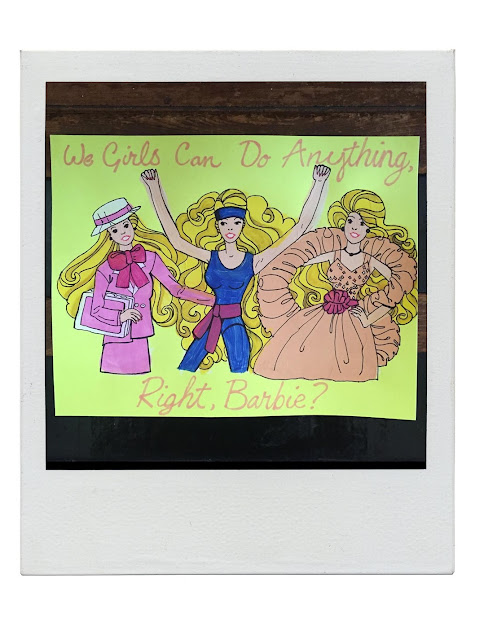 When I was a child in the eighties, there was a year or two when the TV ad with this tagline played constantly. I didn't think much of it at the time -- it just washed over me and lodged in my brain the same way thousands of other jingles and slogans did. But somehow, in adulthood, it has surfaced as the number-one best example I can think of to illustrate so many things about that moment in time: first and foremost the outrageous capitalist co-opting of feminism ("you've come a long way baby" ain't got nothing on this Barbie ad, imho); then, adding insult to injury, the fact that the "anything" "we girls" can do seems to consist of being a secretary, an aerobics instructor, or a southern belle; the unremitting whiteness and blondness -- not only of these particular humanoid figures, nor even of the Barbie franchise in general, but of the entire cultural construct of femininity, beauty, and even power; not to mention all the things it's easy to take pot-shots at Barbie for: the vapid faces, the boobs. This is actually the second time I've drawn this. The first time I didn't feel like I captured the ways in which this particular image epitomized a prominent cultural thread from the era of my own girlhood, or my own feelings about it. So I tried again. Still not sure if we're there yet, though.
Posted by Bridget Watson Payne at 8:29 AM
Email ThisBlogThis!Share to TwitterShare to FacebookShare to Pinterest
Labels: polaroids