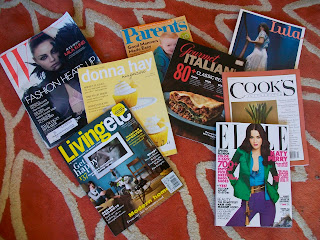 Not sure why, but lately I've been really into magazines. And as you can see, I'm not talking even about the newish crop of hip and high-end magazines like those discussed here. I'm just infatuated with your regular old off-the-newsstand fare--assuming the newsstand in question is a relatively big one that maybe carries a few from overseas as well. 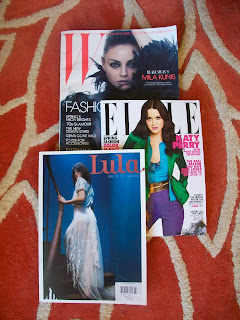 Foremost in my heart, these days, are fashion magazine. Ok, ok, so perhaps Lulu is actually one of those high-end publications I was just saying I didn't follow--you got me. Every issue is so dreamy and ethereal, it's amazing this one would even stay down on the rug long enough to be photographed; despite it's substantial bulk (which is mostly all a gazillion features and only a few ads up front) it feels as if the whole thing might just float away at any moment. Elle and W were the first fashion magazines I ever discovered, round about the seventh grade, and I've just recently started picking them back up again with great enjoyment. 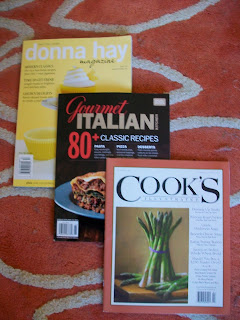 A close second to fashion mags are food magazines. Cook's Illustrated may be the oddest, most persnickety, and best-reading cooking magazine of all time. It's awesome to see the much-mourned Gourmet make a reappearance, if only for a one-off. And Donna Hay is a spectacular one from Australia which deserves to be much better known in this country. 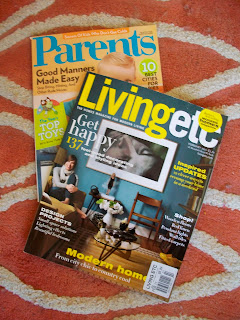 Last up, a bit of a miscellany. I'm always on the search for the perfect shelter magazine, and Living Etc. from the UK is the best I've seen. They still do show more empty-white-box houses than I personally care to look at, but every issue also has at least one, and sometimes more, home full of personalty, quirkiness, and color. And then there's Parents, a dirty little secret living in the back of the magazine rack--given to me as a gift, but surprisingly much more readable than I expected. All in all, a good crop.
Posted by Bridget Watson Payne at 8:45 AM
Email ThisBlogThis!Share to TwitterShare to FacebookShare to Pinterest
Labels: inspiration