The Next Poem in the Series About Fall 2005 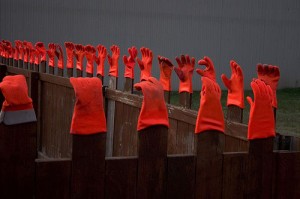 September 21, 2005
Yesterday when I left work I was so tired I fully intended to take the bus

Then this morning the woman I see every day
sweeping the sidewalk
outside the scientology center and the submarine sandwich place
(I always wonder whether she’s a scientologist or a sandwich maker)
was wearing new
bright red rubber gloves
And there was a man outside the youth hostel lashing a couple surfboards
onto the roof of an old station wagon with a rope using seamanlike knots
He was not American surely
Posted by Bridget Watson Payne at 8:29 AM
Email ThisBlogThis!Share to TwitterShare to FacebookShare to Pinterest
Labels: poetry