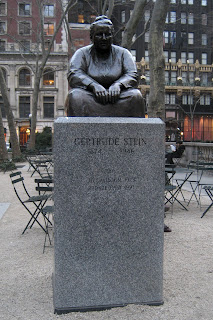 It's not coincidence that I've been reading a fair bit by and about Gertrude Stein lately. I've commented before on the way we cannot, any of us, escape the zeitgeist of the cultural moment--it's like the air we breathe, even without knowing it. And, in San Francisco at least, we are having a decidedly Gertrude moment. Or, perhaps more accurately, a Gertrude/Picasso moment. 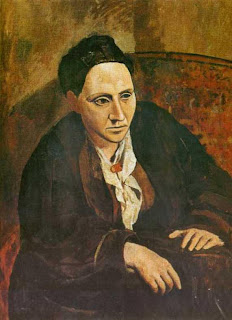 We've got a show about the both of them at the SFMOMA, a show about her at the Contemporary Jewish Museum, and a show about him at the De Young. So, as I say, no great shocker that she's been on my mind. Hence my discussion the other week of her quotation about the "daily miracle." But now, in doing some further reading over the weekend, I've discovered that I may have had the wrong end of the stick entirely. Because apparently Stein and Alice Toklas referred to Stein's writing itself as the "nightly miracle." So perhaps the Daily Miracle was not the magic thing in the day (as I'd imagined) after all, but rather the thing the artist makes each day. I could do more research, of course, and try and find out if the Daily Miracle and the Nightly Miracle were in fact the same thing for Stein, or two different things. But personally, I prefer to leave the ambiguity in place in my mind. A desire I imagine the woman who wrote "The change in that is that red weakens an hour" might be ok with.

image sources are here and here
Posted by Bridget Watson Payne at 8:43 AM
Email ThisBlogThis!Share to TwitterShare to FacebookShare to Pinterest
Labels: inspiration