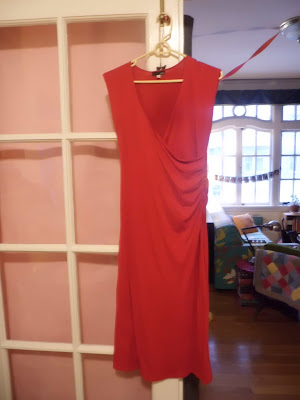 The other day I wore a red dress that I've had for ages. I first bought it, impulsively, for Valentine’s Day, I think it was in 2002—Bill and my first Valentine’s together—in a little shop on Colusa Avenue, just off Solono, in Berkely. I wore it, and brought over my corduroy-and-denim patchwork quilt (my own baby quilt, which has never been far from my life for long, and which Mabel now sleeps under at night) to Bill’s apartment, and we went and got Italian food from our favorite Italian restaurant in the Mission, Il Cantuccio, and brought it back and had a dinner picnic on the floor. I thought the dress was seriously sexy at the time. And while I still think it's quite winsome, standards of what’s provocative change in a decade. In '02 we were still practically in the 90s, the era of huge flannel shirts and even huger pants, and knee-high black boots still seemed like daring quasi-dominatrix-wear, rather than the wardrobe staple of every woman on earth they would become. Anyhow, I dug it out of the closet, and wore it, and it turns out these days it suits quite well for the office with tights and oxfords and a cardigan. I was pleased as heck to discover how much I still like it. A nearly ten-year old dress that still feels really wearable and good. Pretty rare.
Posted by Bridget Watson Payne at 8:22 AM
Email ThisBlogThis!Share to TwitterShare to FacebookShare to Pinterest
Labels: inspiration