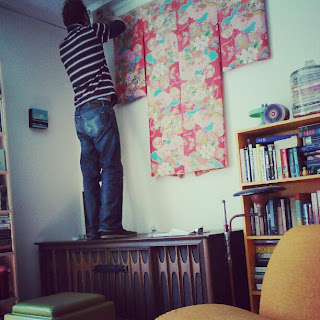 One of our new year's resolutions this year was to frame and hang the dauntingly large number of artworks stashed in the linen closet. Because I work on art books a number of authors/artists have been kind enough to gift me with prints of their work, and there have also been gifts from friends and even a few self-purchases--all of which added up to a lot of tubes and cardboard folders tucked away, in some cases for years. So we've spent the last few months inventorying and measuring everything, buying frames for it all, and putting the stuff into the frames. And on Friday, while Mabel's Grandpa took her to the playground, Bill and I stayed home and hung it all in one fell swoop. First we had to take down the vintage kimono (which belonged to my great aunt Harriet, a gift from her beaux Tommy, who was in the merchant marines), which had hung there since we moved in almost nine years ago. 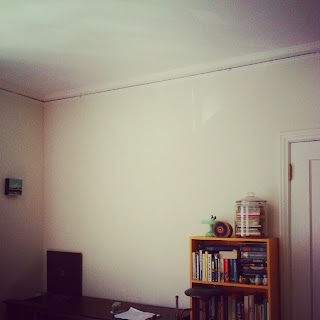 This revealed by far the largest swath of empty white wall we've seen in this joint in the nearly a decade we've lived here. So, that's the "before"--and I did mean to take some "during" shots, but got too busy with the picture hooks and the pencil and the hammer and the ruler and all of that. So, we jump straight on to the "after": I am so so pleased with how this came out I can hardly convey it. Just what we wanted. From left to right, top to bottom, here's who made these things: Jorge Colombo, Misha Ashton-Moore, Jen Altman, Kari Herer, (unknown), the Hubble Telescope, Mike Perry, Tom Bachand, (unknown), (unknown), David Maisel, Jenny Volwaller, Julia Rothman, Matt Stephens, and Idiot's Books (this last one, unfortunately, does not photograph well, but you can see it here).