Three, Oh It's a Magic Number 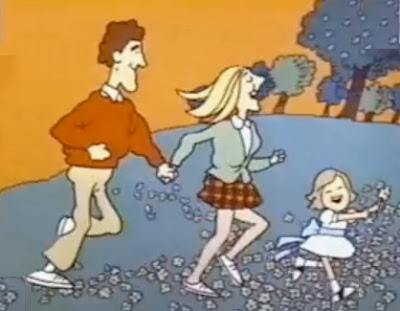 This is just to say that there is: No. Scientific. Evidence. Whatsoever. that only children are more lonely/selfish/maladjusted than their counterparts with siblings. None. It's a stereotype that goes unchallenged and that people feel perfectly comfortable hauling out as if it were fact, when in fact it's anything but. The only study that has ever found a difference has to do with sad feelings in adult children during the illness of an ageing parent (it is, in fact, easier to endure that hardship with company than alone). The rest is so much bull-pucky. I'll spare you an endless rant, but if you're interested you can read more about this here.

Image above immortalizes the classic lyric "A man and a woman had a little baby, yes they did, there were three in the family, and that's a magic number" from Three is the Magic Number on the old Schoolhouse Rock educational show.

Posted by Bridget Watson Payne at 9:10 AM
Email ThisBlogThis!Share to TwitterShare to FacebookShare to Pinterest
Labels: inspiration