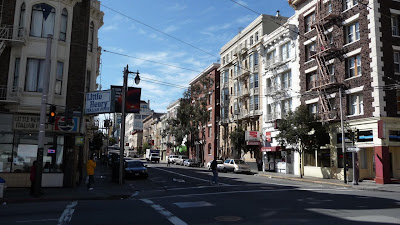 This is my neighborhood. Tenderloin Heights, we like to call it. Tallish masonry apartment buildings, fire escapes, little bodegas, people on the sidewalk. Throw in some aluminum trash cans, a stoop or two, maybe a wall made out of old doors, and, I recently realized, to my eye it looks a lot like...

Sesame Street. I've come to think that my notion of what adult life ought to look like, the deep-seated feeling I have that urban equates to homey, even wholesome, stems from my late-70s television viewing of, let's face it, the best children's program ever made. 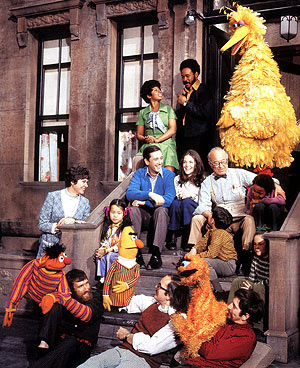 When I was a kid growing up in the suburbs, the favorite game of the neighbor kids I played with was called "Apartments." A modified version of "House" it consisted mostly of assigning each long suburban driveway a locale--this one was my apartment, this one was your apartment, this one was the grocery store, this one was work--and then riding our bikes up and down the block between these various locations in a sort of parody of adult life. Is it a coincidence that, if I'm not mistaken, all five of those kids, plus myself, now live in apartments in either San Francisco or New York? And the glamor of urban life for us, I'm now convinced, started with the work of the Children's Television Workshop.

Side note: while I was looking up images for this post, I stumbled upon this article about how Sesame Street, in the 70s and 80s featured breast feeding pretty regularly, and since has stopped. Longtime readers may recall that censorship and shame around breastfeeding in public is something of a hot button issue for me. I mean, come on, how could you not love this:

Get it together Sesame Street, bring back the boob.

top image source is here.
Posted by Bridget Watson Payne at 8:35 AM
Email ThisBlogThis!Share to TwitterShare to FacebookShare to Pinterest
Labels: inspiration