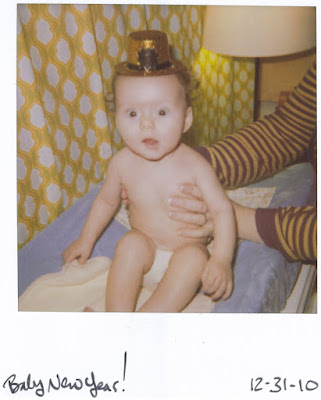 A year and three days ago we put Mabel in a pasteboard hat to pose as baby new year. She could not yet sit up, and the tiny hat actually almost sort of fit her head. She looks quite hilariously dazzled by the flash. We took another one this year (not yet scanned in) in which she is standing, and the same hat looks perched on her head like a cherry on a sundae. Ah, the relentless passage of time, and its adorable and humorous yeto poignant inevitability. A new year's message if ever there was one.
Posted by Bridget Watson Payne at 7:46 AM
Email ThisBlogThis!Share to TwitterShare to FacebookShare to Pinterest
Labels: polaroids