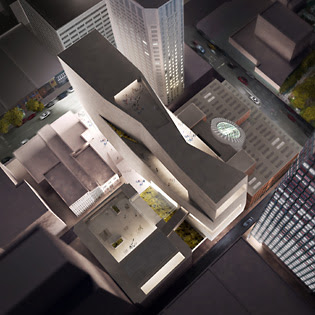 As an art-loving San Franciscan, of course I've known for a while that the Fisher Collection was granted to the SFMOMA on a long-term basis (a hundred years, to start, I believe) and that, as part of that arrangement the museum would be expanding. What didn't sink in until recently, though, was the sheer scale of this project. Not only is the new part of the building going to be positively gigantic (the little structure at the right of the image above, with the striped roof and round skylight is the entire, quite large, existing museum) but the museum is also going to be closed for three years to make it happen. 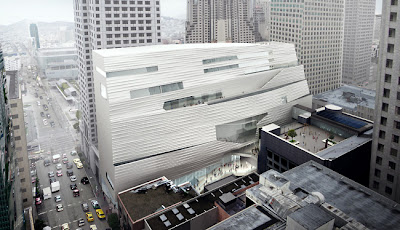 So my coworkers and I were all running around like headless chickens the other day when we realized this--three years! oh my god! that's a really long time! Until my awesome colleague Peter sent us these photos from his visit to the Oslo Opera House, designed by Snøhetta, the same architects who are doing the new wing of the museum. 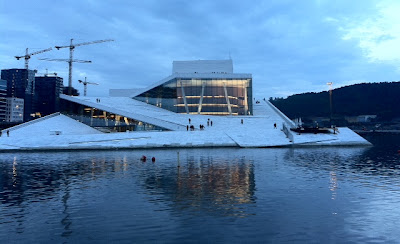 And man oh man is this opera house one amazing looking place. People can walk all over the sloping outsides of the building in the Nordic twilight, for Pete's sake! It runs right down into the water like a piece of the seashore! If that's the sort of tremendous building we have to look forward too, then I would say it's well worth the wait. Call me an enthusiast, but I love it when the circus comes to town--particularly when it takes the form of world-class architecture. 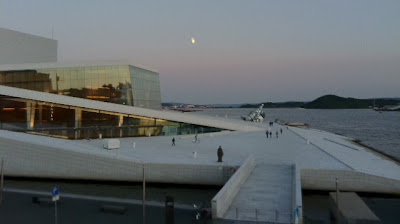 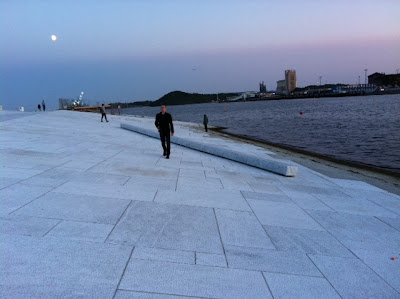 Top two photos of the proposed new museum wing are from the SFMOMA site. Bottom three photos of the opera house are from Peter Perez.
Posted by Bridget Watson Payne at 8:39 AM
Email ThisBlogThis!Share to TwitterShare to FacebookShare to Pinterest
Labels: inspiration