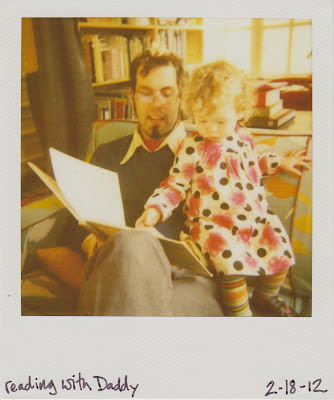 I've mentioned before (here and here) how 2012 is turning out to be the year our daughter became an officially designated book freak. As a friend of mine commented when I told her over the weekend how pretty much obsessed Mabel is with her picture books, how she could basically keep bringing them to you and sitting and listening to you while you read them to her all day long: it's no great surprise. She's growing up in an apartment jam-packed with books and bookshelves, being raised by a school teacher and a book editor. I mean, what do you expect? Still, it's gratifying to see. I remember thinking before she was born that I could and would easily love her no matter who or what she turned out to be--that the only things which would be the tiniest bit hard to swallow would be if she were not a reader, or if she were a Republican. So, well, that's one down.
Posted by Bridget Watson Payne at 8:28 AM
Email ThisBlogThis!Share to TwitterShare to FacebookShare to Pinterest
Labels: polaroids