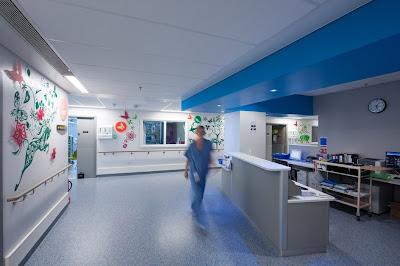 You know when an idea's time has just kind of come? Something you've never heard of or given any thought to before, and then all of a sudden you find it mentioned two or three or four times in as many months, or even weeks? I've recently started to notice that kind of momentum gathering around the notion of putting art--real art, not cheap knock-off impressionist posters--in hospitals. Above, an installation by Tord Boontje at the Royal London Hospital. When I think of the times I've had to spend time in hospitals, and the small but palpable lift I would have received from seeing something like this there, it drives home what an obviously good idea this relatively simple notion really is.
Posted by Bridget Watson Payne at 8:30 AM
Email ThisBlogThis!Share to TwitterShare to FacebookShare to Pinterest
Labels: art