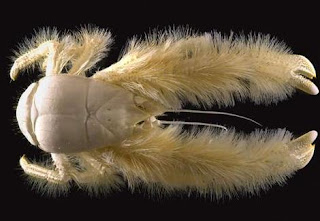 Wikipedia has this to say about Kiwa Hirsuta:


Kiwa hirsuta is a crustacean discovered in 2005 in the South Pacific Ocean. This decapod, which is approximately 6 inches long, is notable for the quantity of silky blond setae (resembling fur) covering its pereiopods (thoracic legs, including claws). Its discoverers dubbed it the "yeti lobster" or "yeti crab." It was found along the Pacific-Antarctic Ridge, 900 milea south of Easter Island at a depth of 7,200 feet, living on hydrothermal vents.
Which, ok, in itself would be amazing enough. But I think the reason Kiwa Hirsuta hangs around in the back of my mind, year after year, also has to do with a piece by Mark Morford that appeared in the San Francisco Chronicle shortly after its discovery, which reads, in part:


...You're up to your neck in it, right? Too much white noise, too many demands on your time...you're all up in the world and the world is all up in you and sometimes you spin and spit and whirl and just can't seem to find the ground...

But then something happens. Sometimes, somehow, these little gems of yes slither on through...and your head clears...and you see anew.

...Big deal? Maybe not. But then again, maybe. Maybe it's something to which you should pay some divine, gleeful attention. Maybe all you have to do is look a little closer. Maybe it's absolutely mandatory that we remember how to do so. You think?
Posted by Bridget Watson Payne at 9:09 AM
Email ThisBlogThis!Share to TwitterShare to FacebookShare to Pinterest
Labels: inspiration