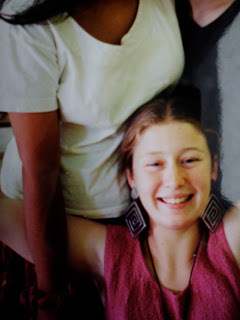 I said something to someone the other day about how, in high school, I used to wear "door-knocker earrings" (which, because my ears weren't pierced, considering the size and weight of some of these things, was insane). But the person I was talking to didn't know what door-knocker earrings were.  So I did something I've been meaning to do for sometime. I dug out my high-school photo album to take a considered look at the clothes. 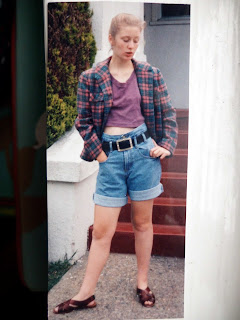 I had a reputation, as a teen, for wearing crazy outfits. But looking through this album, I'm realizing that came later. Senior year, junior year maybe. Before that I was just your typical early nineties suburban teen rocking things like paper-bag waisted cuffed jean shorts with a vintage wool jacket. 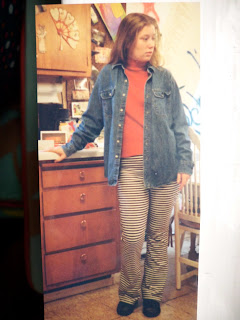 Or stretchy black and white jersey pants and a red turtleneck and a men's denim work shirt. The distance of time makes it hard to be sure, but I'm thinking these looks were nothing exceptional in the pre-grunge years. 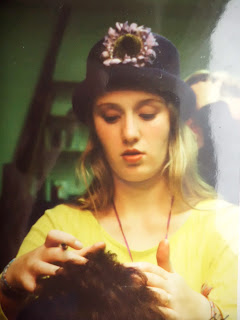 Turns out I even had one of those hats with the flower on it like that girl on that tv show. (In this picture I am doing another kid's hair, and wearing heavy make-up, because I'm backstage before a performance of one of the many, many high school plays I was in. But the hat, I happen to know, was not part of my costume. No, that was my very own hat). 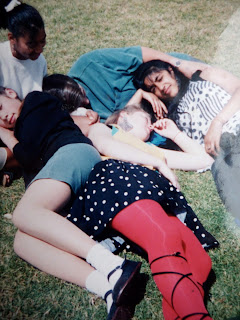 Ok, so this is where things started to get weird. Shoes with strings that laced up around my red tights-clad legs, polka dot skirt, turquoise blue tank top, mustard yellow vest. I also love the fact that lying around in a heap on the grass was a pretty standard way to spend the time. I wonder if that's still true. 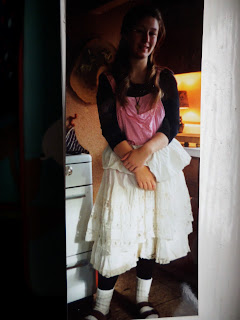 And this one is really the creme-de-la-creme. Huge vintage eyelet petticoat thing worn over pink and white checked gingham shortalls, accessorized with big wooly hiking socks and Birkenstocks. And no doubt I thought I was keeping things toned down by choosing a black tee and leggings for underneath. 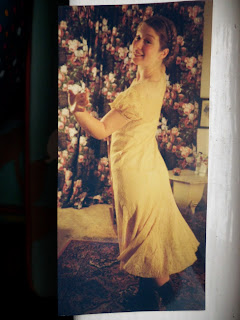 This, I actually still quite like. Vintage lace dress, combat boots, and heidi braids, worn to the Senior Banquet where I expected to be given the award "Most Likely to be Arrested by the Fashion Police" until at the last minute they canceled all the "mean" awards. I was deeply disappointed.

All in all, that thing they say about the past being a different country holds true. I do more or less remember what it felt like to be the girl who wore these clothes, but their meaning is, these days, a bit lost on me--like the language you could once speak but have grown rusty in. Not to mention, so many key pieces it turns out I don't have photos of. Where is the pink silk shirt with sleeves made out of dozens of collars? Where is the chartreuse angora sweater? The trapeze mini dresses worn with rainbow tie-die leggings? The dozen other pairs of huge clip on earrings, some of which brushed my shoulders? Lost in the mists of time.
Posted by Bridget Watson Payne at 10:49 AM
Email ThisBlogThis!Share to TwitterShare to FacebookShare to Pinterest
Labels: inspiration